Outstanding Women of The Well

Joan Gullen’s Reflections on The Well

I enjoyed a wonderful lunch with Joan, Matron of The Well, where she shared with me her reflections of The Well. Joan has been involved with The Well for over 10 years along with her expansive career in social services and as a community activist.

Joan answered the question: “Why are you involved with The Well?”

My involvement with The Well is focused on two levels: front line service and function in the larger system.

The front line service can be extended to the role of the Management Board. The Well is more than just offering food; it is about building a community, about belonging. It is built on the idea of sharing, not just   resources but the sharing of ourselves. It is to show that “someone gives a damn as to what happens to a woman”. The Well aims to be non-judgemental and tries to minimize the power differential between staff and participants through personal sharing.

The role of The Well in the larger social services sector is to be an advocate demonstrate the values of social justice but not to be a charity. We are to hold the government accountable in their role to provide social services to the vulnerable and marginalized in our society. Over many years, we have witnessed the dismantling of the welfare state with serious repercussions to the people that we ‘serve’. Insufficient funding and funding cuts suggest that this human need is not important.

Knowing the reality of poverty and marginalization, The Well offers community and dignity which is important “in being human…in knowing that we are in this together”.

Countless women have contributed to the success of The Well over the years, making it a warm and welcoming gathering space for women.

We would like to honour the contributions of two women in particular, who we have lovingly called “The Well’s Belles”: Beth Cook and Rosemary Watkins.

As a longstanding volunteer, mentor, friend, shepherdess and “number cruncher” (i.e. accountant) at The Well, Beth began as one of the visionaries of The Anglican Diocesan ministries serving women, supporting the development of the emergency women’s shelter and The Well.

With her gentle spirit and unconditional love, Beth is considered one of the founding mothers of The Well, who has offered countless hugs, words of encouragement, mentoring and support to the many Women of the Well over the past 25 years. 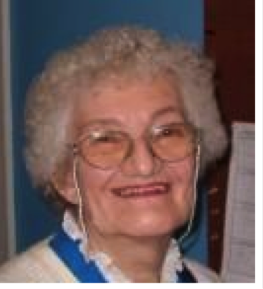 Rosemary was a dedicated volunteer at The Well contributed countless hours to the Women of The Well from the early 1990s until her passing in 2013.

Rosemary began as a Arts & Crafts Facilitator, but was always ready to help out anywhere she was needed. Every Monday morning, Rosemary woke up early to bake fresh muffins for the Women of the Well, and to help with making coffee, tea and lunch.

Rosemary Watkins died peacefully at St. Vincent Hospital on Sunday, 28 April 2013, but will always be remembered as a bright and shiny star, whose thoughtfulness and endless devotion to caring for others is truly awe-inspiring! 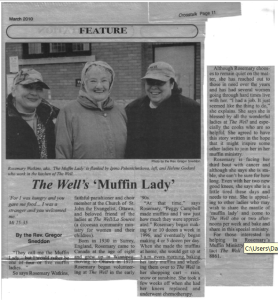 Thank you, Beth and Rosemary for your outstanding support and contributions to The Well over the years!